[*can takes more fee at some of countries by covid.] 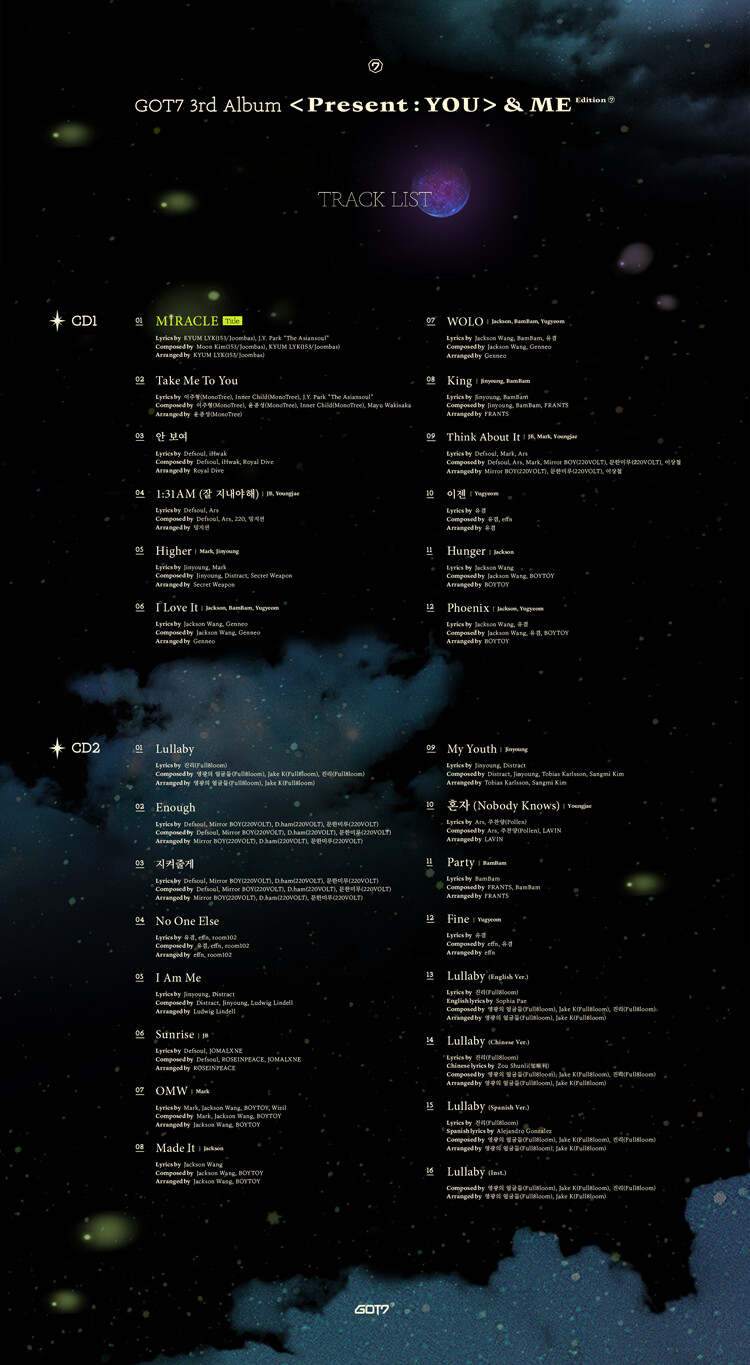 'GOT7', repackage album'<Present: YOU> &ME Edition' and title song'Miracle' released!

In 2018, GOT7 had a miracle year. By completing world tours in 17 overseas cities such as Asia, Europe, North America, and South America, we raised our status as a'global trending stone', and both'Eyes On You' and'Present: YOU' albums released earlier obtained Gaon Chart Platinum certification. Proven high popularity.

<Present: YOU> &ME Edition' is an album that expresses gratitude to fans at home and abroad for making such a miracle, and adds'ME' to the message of the regular 3rd album'Present: YOU', "The best gift of life for GOT7 is the fans". Is completed with the fans.”

Track 1 and title song'Miracle' is a ballad song for GOT7 to sing about when the true miracle moment is. 'The real miracle for GOT7, which debuted in January 2014, is the moment when we met the fans who helped us overcome the cold and difficult times like winter.' Jinyoung Park, the head of JYP, who has been with the members from GOT7's trainee days to the 5th year, participated in the lyrics and added specialness to the song.

Track 2, ‘Take Me To You,’ is a pop ballad song that compares the appearance of falling in love to a situation in a remote island. The members' attractive voices are harmonized with guitar sound-based tracks reminiscent of the sea, giving listeners a sense of immersion. Jinyoung Park participated in the lyrics and melted the sweet sensibility.

Track 3 “I Can't See You” is a track written and composed by leader JB. It is a hip-hop song with an electronic lead guitar sound and an 808 bass punch. Through the lyrics “My proud, lovely girl” and “Every day is already a birthday just with your own thoughts,” she expressed her heart for her fans cutely and wittyly.

Track 5'Higher' is an exciting dance song by Mark and Jinyoung Unit, which conveys the message'Please raise me higher.'

Track 6'I Love It' is a solo hip-hop track featuring Jackson's charming voice.

Track 7'WOLO' is an abbreviation of'We Only Live Once' and it contains the message to enjoy the life of living once without worrying about what others think of me. It is a hip-hop genre song with units of Jackson, BamBam and Yugyeom.

Track 8'King' is a song written and composed by Jinyoung and BamBam, and sings of confidence that they will show their best appearance.

Track 9'Think About It' is a unit song by JB, Mark, and Youngjae, which expresses their determination to overcome difficult and difficult situations.

Track 10'Now' is a song written and composed by Yugyeom, and is a song of the R&B genre that expresses his sad feelings towards the other person.

Track 11'Hunger', as the title suggests, is Jackson's solo song, which means that he will not succumb to any difficulties and face up and grow confidently.

Track 12'Phoenix' is a duet song between Jackson and Yugyeom that conveys the message that if GOT7 and Agassi (GOT7 fan club) work together, no matter what kind of hard work in the world.

Through this activity, GOT7 will fully exude infinite love for fans and uncooled passion for music. GOT7, which has returned with the repackage album'<Present: YOU> &ME Edition' and the title song'Miracle', is ready to decorate the end of 2018.